GENRE:   Mystery
~~~~~~~~~~~~~
BLURB:
Nostalgia City executive Kate Sorensen finds the body of a mechanic crushed under an automobile hoist in the theme park’s garage. Accident or murder? Will it impact Kate’s decision to become an advisor for one of two competing campaigns to legalize marijuana in Arizona?
When the death is ruled a homicide and the DEA stages a surprise raid, park cab driver Lyle Deming is recruited to help solve the murder and find out if the park’s garage is being used to smuggle drugs. The anxiety-ridden ex-cop is soon poking around a Mexican border town looking for a park contractor who might be a drug mule. Or he might be dead.
Meanwhile, Kate, a 6-2 former college basketball star, is in the middle of a heated clash between potential corporate control of pot marketing and a laid-back, grow-your-own approach. As Kate wonders whether she should mediate or advocate, she’s forced to dash for her life. Amid setbacks and threats, she and Lyle must sort through interwoven crimes, a tangle of evidence, and dark suspects.
Then there’s another murder.
The Marijuana Murders is the third novel in this mystery series set in Nostalgia City, a theme park that re-creates—in every detail—a small town from the 1970s.
~~~~~~~~~~~~~ 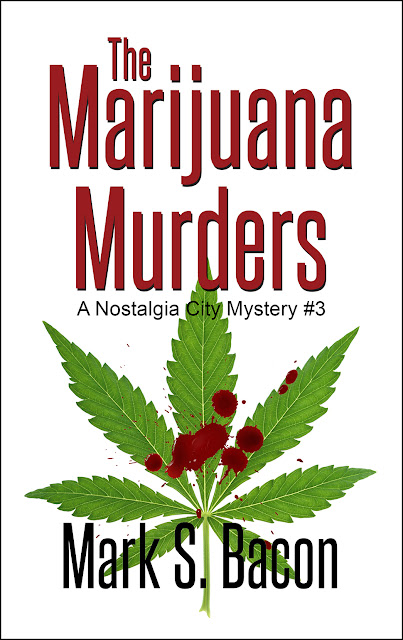 When they started up the walkway to the neighbor’s house, a double-wide trailer home, they heard a dog growl somewhere within. A large dog. When they stepped up on the home’s wooden deck, a middle-aged woman in jeans and a western blouse cracked the front door open. “What do ya want?”

The growling got louder.

Rey pulled out his badge and identified himself. “I wanted to ask you a few questions about your neighbors.”

“Okay, come on in.” She pulled the door open wide.

A rottweiler slightly smaller than a Bengal tiger sat on the floor near the door. His growl rumbled like a low-rider car stereo.

“Oh, don’t worry about him,” the woman said. She motioned to the dog. “Benji, quiet. Stay.”

Lyle and Rey stepped into the living room. “We’re following up on the car theft next door. Do you know your neighbors to the west very well?”

“Them? Hell no. They come and go. Sometimes late at night. Vanessa, I think that’s the woman what owns it. She says she has a big family that mooches off her. I ain’t stupid. Somethin’s going on over there. Cops were here this morning asking about that car theft.”

“He did, about two, three o’clock. That’s what I told the other cops. I heard some noises, but I mind my own business.”

“How long has Vanessa lived there?” Rey asked.

“You know where she came from?”

“You ever talk to any of Vanessa’s family,” Lyle asked, “visitors?”

“No, sir. They don’t come ’round wantin’ to talk. ’Course I usually leave Benji out on the porch.”

Nostalgia City is a popular tourist destination. The story has an interesting theme park in the desert in Arizona. It all comes about to a billionaire's niece doing a science fair project and he finds this thrilling. The theme park is centered around the 60's-70's. Cars are a big part of the theme park. Then the murders start to occur. Kate & Lyle are the main characters who are centered around the murders.  The story also includes the city's desire to make all marijuana legal to adults.
I found this story to being very imaginative. Each page was thrilling and shocking. The story was definitely different and outside the box. Each page had me feeling like I was on a roller-coaster experiencing the ups & downs of the ride with each turn. This is a must read story!

~~~~~~~~~~~~~
AUTHOR Bio and Links:
Mark S. Bacon began his career as a Southern California newspaper police reporter, one of his crime stories becoming key evidence in a murder case that spanned decades.
After working for two newspapers, he moved to advertising and marketing when he became a copywriter for Knott’s Berry Farm, the large theme park down the road from Disneyland.  Experience working at Knott’s formed part of the inspiration for his creation of Nostalgia City theme park.
Before turning to fiction, Bacon wrote business books including Do-It-Yourself Direct Marketing, printed in four languages and three editions, named best business book of the year by the Library Journal, and selected by the Book of the Month Club and two other book clubs.  His articles have appeared in the Washington Post, Cleveland Plain Dealer, San Antonio Express News, Orange County (Calif.) Register, and many other publications.  Most recently he was a correspondent for the San Francisco Chronicle.
The Marijuana Murders is the third book in the Nostalgia City mystery series that began with Death in Nostalgia City.  The first book introduced ex-cop turned cab driver Lyle Deming and PR executive Kate Sorensen, a former college basketball star.  Death in Nostalgia City was recommended in February for book clubs by the American Library Association.
Bacon is the author of flash fiction mystery books including, Cops, Crooks and Other Stories in 100 Words.  He taught journalism as a member of the adjunct faculty at Cal Poly University – Pomona, the University of Nevada – Reno, and the University of Redlands.  He earned an MA in mass media from UNLV and a BA in journalism from Fresno State.   He gets many of his ideas while walking his golden retriever, Willow.
Website: https://baconsmysteries.com
Twitter: https://twitter.com/baconauthor
FB: https://www.facebook.com/markbaconmysteries/
Buy Links:
Amazon: https://www.amazon.com/Marijuana-Murders-Nostalgia-City-Mysteries-ebook/dp/B07PBHX347/
Barnes and Noble: (e-book) https://www.barnesandnoble.com/w/books/1130777355
Barnes and Noble: (Print) https://www.barnesandnoble.com/w/books/1130780072
Apple: https://itunes.apple.com/us/book/the-marujuana-murders/id1455142996?mt=11
Smashwords: https://www.smashwords.com/books/view/926811


Enter to win a $25 Amazon/BN GC - a Rafflecopter giveaway
Posted by Enchanting Reviews at 7:04 PM